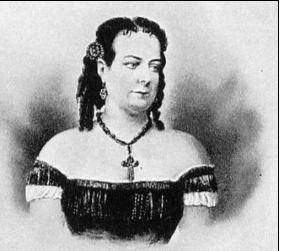 According to Odell's Annals of the New York Stage, Ms. Crampton performed the role of Mazeppa on January 3, 1859 at the Bowery Theatre.  History remembers Adah Isaacs Menken as the most popular Mazeppa. Now we can set the record straight that Charlotte, according to a handbill, " was the FIRST actress to attempt the part with her two beautifully trained horses--Alexander and Black Eagle executing the most intrepid feats ever performed by a lady." While La Menken appeared to be nude in flesh-colored tights, Ms. Crampton didn't appear nude nor was she tied to the horse's back which gave Menken the 'edge'.
June 3, 1861.
"If she was but a foot taller, she would startle the world."  William C. Macready
Macready was not known to shower praise on anyone but himself, but indeed Charlotte must have been quite the talented lady to receive this accolade from him.

Born into a theatrical family, she was well-educated and was capable of reading, writing, and speaking several languages.    From her theatrical debut at the Columbia Street Theatre in Cincinnati, Ohio at the age of 15, she made rapid progress in the acting profession and overcame a short, stout, stature by hard work, her natural histrionic ability and according to historian/actor Joseph Haworth, a 'touch of genius'.
She acted in nearly all of the principle theatres in the United States and was a leading lady to both Edwin Forrest and William Macready.  Her interpretation of Lady Macbeth was unanimously praised but she was also convincing in 'britches' parts--Richard lll, Iago and Hamlet.

SERVICE DURING THE CIVIL WAR
Her first husband was Charles Wilkenson; next spouse was Charles B. Mulholland, a well known comedian.  That alliance produced a son.  During the early part of the Civil War, she heard that her son, a Union soldier, had gotten into trouble. It is reported she walked from Wheeling, West Virginia to Washington, D.C. to solicit favor for him from President Lincoln.  Shortly afterwards she enlisted in the Union Army, administering aid and comfort to sick and wounded soldiers.

After the Civil War she lectured on the temperance circuit for a while but she missed acting and was soon traveling with a small company on the New England circuit. She reclaimed her career in larger theatres. At the time of her death she was playing old women and character roles. However, a few days before she passed away, she was playing Gertrude in Hamlet at Macauley's Theatre in Louisville, Kentucky. 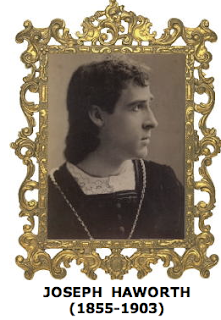 As a boy, Joseph Haworth had applied for acting work at John Ellsler's Academy of Music, Cleveland, Ohio.  When Ellsler offered him 'extra' work, he declined. But when his father, a government surveyor died in 1865, he had to leave school and work for a newspaper office. He was tenacious about being hired by Ellsler for onstage work. In 1873 Ellsler relented and let him contribute a recitation at a Monday evening amateur night.
His rendition of the ballad "Shamus O'Brien" closed out the evening and brought down the house.  Charlotte Crampton, then in residence at Ellsler's, saw his performance from the wings and was so impressed that she offered him the role of Buckingham in her production of Richard lll. She was playing the title role. Joe received rave reviews in the Cleveland Plain Dealer.

He became a member of Ellsler's company as a utility man, playing a variety of roles.  Ms. Crampton became his first great mentor, teaching him all the stage business of Edwin Forrest and William Macready. These tutorials became the basis for his technique and he was able to bridge the classical style of Macready and the heroic style of Forrest throughout his long career.

Boston Daily Advertiser, 1887   Interview with Joe Haworth
"My first appearance in Cleveland I played Buckingham at age 20 opposite Miss Crampton as Richard. She made a wonderful Richard. She had a very masculine voice and I remember how she dressed for the part.
She used to wear a small moustache and goatee which gave her a rather demonic expression. I was nervous when I stepped on the stage, but I did not forget my lines.  When I finished my scene I looked in the wings and saw Miss Crampton there crouched up waiting for her cue and looking as though she was ready to spring to the stage. I was almost frightened to death. I gave a loud shriek of fright which took many days to forget.
....I remained with Ms. Crampton a year and then accepted an offer from Mr. Ellsler to play in his theatre in Cleveland.  At the conclusion of the season I was given a benefit; I picked out Hamlet as the play.  Ignoring advice from friends against this role, the house was crowded and pleased.  Until the closet scene.  I had just finished the lines 'look upon this picture' etc., when I looked across the stage and there stood Miss Crampton in that Richard lll costume glaring at me exactly as that unforgettable night.  THE WOMAN HAD BEEN DEAD A YEAR!
I stood transfixed with horror and couldn't speak. The audience thought I was acting and gave me numerous rounds of applause. The apparition vanished slowly and when I closed my eyes for a moment, the demonlike figure had vanished.

"I am not a spiritualist, and I cannot account for that horrible experience.  Call it an optical illusion or anything you will, I shall never forget it.  Miss Crampton was buried in a little Catholic burying ground in Louisville. I remember when I was playing there I visited her grave.  A small stone marks her resting place, but when I am rich this shall give way to a more substantial monument.
It was very strange indeed, but lying on her grave, I found a long, rusty looking knife.  I do  not know how it came there. I examined it and returned it to its position. I assure you that I did not like the looks of it, and often since then have I thought of how it came there."
End of interview from the memoirs of Joseph Haworth.