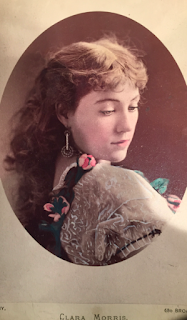 April 14, 1865 is a day that will always be a painful reminder of the assassination of beloved President Abraham Lincoln who was killed by an actor, a member of the prestigious Booth family, the brother of Edwin Booth---who liked to be referred to by his friends as just Wilkes.

In her autobiography, one of three, entitled Life on the Stage (1902), she recalled her connection to him. She had portrayed the role of Gertrude at the age of 16 to Edwin Booth's Hamlet ("All girls have their gods; mine was Edwin Booth!") circa 1863 at Ellsler's Academy of Music in Cleveland. When John Wilkes Booth appeared there, she was most impressed with his talent and physical attributes. The Booths were revered by the theatrical community. While Edwin was quiet, reflective, intense and the perfect Hamlet; John was theatrical, magnetic, sexual, fiery and charismatic.

Clara shared her memories of John Wilkes Booth and from her experience describes his acting style and his chemistry on stage and off.

".....one figure stands out with clearness and beauty. In his case only there was nothing derogatory in being called 'beautiful', for he was that bud of splendid promise, blasted to the core before its full triumphant blooming--known to the world as a madman and assassin, but to the profession as that 'unhappy boy' John Wilkes Booth.
He was so young, so bright, so kind.  He was, like Edwin, rather lacking in height, but his head and throat were truly beautiful. His coloring was unusual, the ivory pallor of his skin, the inky blackness of his thick hair, the heavy lids of his glowing eyes, were all Oriental and they gave a touch of mystery to his face when it fell into gravity. But there was generally a flash of white teeth behind his silky moustache and a laugh in his eyes.

The fair sex was in love with John Wilkes Booth. At depot restaurants those fiercely unwilling maiden-slammers of plates and shooters of coffee cups made to him swift and gentle offerings of hot steaks, hot biscuits, hot coffee, crowding round him like doves about a grain basket.
At hotels, maids had been known to enter his room and tear asunder the already made bed (to make it better.)
At the theatre our smiling faces turned to him, old or young, for the little daughter of our manager (Mr. John Ellsler) who played the Duke of York in Richard lll, came to the theatre each day, each night of the engagement, arrayed in her best gowns and turned on him eyes that might well have served for Juliet.  The manager's wife waved and fluffed her hair, softened her brow line and let her keen black eyes fill with friendly sparkles---yet it was because of him.

FAN LETTERS FOR MR. J. W. BOOTH
His letters from flirtatious women and girls were legion. I remember with respect that this idolized man--when the letters were many and rehearsal already on--would carefully cut off every signature and utterly destroy them, then pile the unread letters up and would remark to me, "They are harmless now, little one." And when a certain free and easy actor, laughingly picked up a very elegantly written note and said, "I can read it, can't I, now that the signature is gone?" He answered: "The woman's folly is no excuse for our knavery. Lay the letter down please!"

ABOUT HIS WORK ON STAGE
I remember hearing the older members of the company express their opinion. Mr. Ellsler, who had been on terms of friendship with the elder Booth (Junius Brutus), was delighted with the promise of his work. He greatly admired Edwin's intellectual power, his artistic care, but JOHN! he cried, "has more of the old man's power in one performance than Edwin can show in a year. He has fire, the dash, the touch of strangeness. He often produces unstudied effects. I question him, "Did you rehearse that business today John?" He answers: "No, I didn't rehearse it. It just came to me in the scene, and I couldn't help doing it, but it went all right, didn't it?" Full of impulse, like a colt, his heels are in the air, nearly as often as his head, but wait a year or two till he gets used to the business and quiets down a bit, and you will see as great an actor as America can produce!"

THE DAY AFTER APRIL 14, 1865
That was an awful time when the dread news came to us. We were in Columbus, Ohio. We had been horrified by the great crime in Washington. My roommate and I had bought some black cotton from our small earnings, at a tripled price, as all the black material in the city was not sufficient to meet the demand, and as we tacked it about our window, a passerby told us the assassin had been discovered and that he was the "actor Booth!"  Hattie laughed so she nearly swallowed her tack that she held between her lips and I, after a laugh, told him it was a poor subject for a jest and we went in.
Mr. Ellsler came by to leave a play with us on his way home.  He is a very dark man, but was perfectly livid, his lips were blanched to the whiteness of his cheek. His eyes were dreadful, glassy, and seemed so unseeing. He sank down, wiped his brow, looked at me and said faintly, 'You...haven't....heard...anything?  Hattie stammered. "A man (he lied though) said that Wilkes Booth...but he did lie, didn't he? And in the same faint voice Mr. Ellsler answered: "No, no he did not lie. It's too true!"
Down fell our heads and while our sobs filled the room, Mr. Ellsler rose and I heard his far, faint voice saying: "So great, so good a man destroyed and by the hand of that unhappy boy! My God, My God!"  Mrs. Ellsler, whom I never saw shed a tear for any sickness, sorrow or trouble of her own, shed tears for the mad boy who had suddenly become the assassin of God's anointed, the great, the blameless Lincoln.
We crept about, quietly. Everyone winced at the sound of the overture. It was as if one dead lay within the walls, one who belonged to us.

POST MORTEN       R.I.P.
When the rumors about Booth being the murderer proved authentic, the police feared a possible outbreak of mob feeling, and a demonstration against the theatre building or against the actors individually.  But we had been a decent, law abiding, well behaved people, liked and respected, so we were not made to suffer for the awful act of one of our number.
That the homely, tender-hearted "Father Abraham" died at an actor's hand will be a grief, a horror, and a shame to the profession forever.  Yet I cannot believe that John Wilkes Booth was the "leader of bloody conspirators!"
Who shall draw a line and say: Here genius ends and madness begins! There was that touch of strangeness. In Edwin Booth it was a profound melancholy; in John it was an exaggeration of spirit, almost a wildness. There was the natural vanity of the actor who craves a dramatic situation in real life. There was his passionate love and sympathy for the South. Undoubtedly he conspired to kidnap the President. That would appeal to him. But after that I truly believe he was a tool. Certainly he was no leader.
Those who led him knew his courage, his belief in fate, his loyalty to his friends, and because they knew these things, he drew the lot, as it was meant he should from the first. Then, half mad, he accepted the part Fate cast him for, committed the monstrous crime and paid the awful price.

We can only shiver and turn our thoughts away from the bright light that went out in such utter darkness.