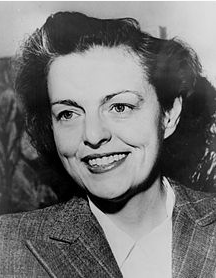 LEST WE FORGET HELEN GAHAGAN DOUGLAS
IN HER OWN WORDS

TODAY'S WOMEN STAND ON HER SHOULDERS

As we have just been through a turbulent chapter in American political history regarding the selection of nominees for the next president of the United States, with more anticipated upheavals at the conventions and during the campaigns, we must remember one of the true democratic women who loved her country so much that she left a prosperous stage career in the dust to run for Congress in 1944.  Due to her liberal views about what needed to be done for social change and justice, she was branded a Communist sympathizer along with her well known husband Melvyn Douglas.

"Immediately after my election, newspapers took up the theme that had been created in Chicago and spoke of the coming 'battle of the glamor queens' between me and Clare Boothe Luce.  We were two of the nine women in the House of Representatives in the Seventy-ninth Congress and there were none in the Senate.  Unlike the other seven, Mrs. Luce and I both were associated with the Broadway stage and both of us mingled with what was regarded as high society.
(Note: She determined not to let silly rivalry get in the way of her important job.)
At a dinner hosted by the women of the Washington press corps, she looked forward to "an end to irresponsible stories that she and Mrs. Luce were feuding."
"I stood for a long moment considering what I would say.....Then I began.
'We're in a war.  My husband is overseas.  I will be in Washington with two small children. I came here to support our country's war effort and to do what I can in Congress to help bring the fighting to a successful end as soon as possible. I'm not here for petty quarrels or a competition with anyone, and certainly not with Clare Booth Luce."      Clare jumped to her feet, leaned across the distance between us and extended her hand.  We shook, grinning.

OBSERVATIONS
CAMPAIGN FINANCE
"Politicians when elected tend to put on blindfolds and vote in ways they believe will get them support and campaign contributions.  This dependence on large private contributions is demoralizing to elected officials.  We've got to put an end to it.  Campaigns should be financed from tax money if we really mean to maintain a democratic system.  Television and radio should be available to candidates on a fair basis without the impossible costs that are being charged today.
Politicians aren't any more wicked than other citizens but the situation in which they are placed warps their judgment.  Wealthy self-interest groups such as the oil barons or Associated Farmers have a lot of power. If you're in office, you don't want them working against you in the next election. Unless you are very deeply committed to a program, as I was to reclamation, the temptation is to make concessions and even to reverse your position."

EMPOWERMENT OF WOMEN
What we want to get at is the root of woman's problems---inferiority. At the beginning of the century a few women tenaciously worked, struggled, endured ridicule--even imprisonment--to obtain the vote. They believed we must share political power if we were to gain independence. They won the first round.....
The female has to be trained from childhood to develop interests and abilities, to be aware of her capacities.  A woman must be given the resources necessary to build an inner life so she can respect herself.

THE POWER OF LIVING THEATER
Everything one does that is verbal helps to make the mind function. When we attend living theater we make an effort to get there.  We set an evening aside for a special entertainment, rather than having it come into our homes via a television set. We purchase tickets. Then, there is the impact between the actor and the listener. The more knowledgeable the audience is about itself, and about the world, the better the actor".

AN EXCERPT FROM HER MEMORIAL BY ABE FORTAS. (U.S. Supreme Court Associate Justice 1965-1969)

"In the paranoia of 1950, there was no chance that Helen could survive an attack of the intensity which was launched against her largely on the basis of her civil rights record.
Even as the sordid events of Watergate were unfolded and it became common parlance to point to the evil aspects of Mr. Nixon's record, Helen remained silent and aloof--a gentlewoman, a person of impeccable taste and essential kindness in vindication as she had been in battle and in defeat...
On the night of December 10, 1977 she rose before a large audience in a New York theater. Radiant in spite of her terminal illness, she read the magnificent words of the Fifth Amendment to our Constitution, followed by a standing ovation.

Postscript: If only Mrs. Douglas could have witnessed the victory of Hillary Rodham Clinton for the first female president of the United States, what an endorsement she would have written as a testimony to HER belief in the power of women. 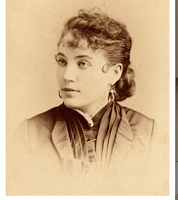 Dear Readers,
I am writing to you as Clara Morris, (an actress of the 19th century who I have chosen to portray in the program Stage Struck).  Mark Twain, the legendary American humorist, was a fan of mine. He introduced me at a lecture event where I was talking about Life on the Stage when the original person assigned failed to appear.  He was extremely complimentary and I was very grateful for his ability to improvise on the spot without rehearsal.  Mark Twain loved the theatre and those who were a part of it.

He loved women and indeed was an advocate for women's rights.  On January 21, 1901, he spoke to members of the Hebrew Technical School for Girls at their annual meeting on the issue of female suffrage.  I am pleased to share with you what he told the packed audience.

"I know that since the women started out their crusade they have scored in every project they undertook against unjust laws. I would like to see them help make the laws and those who are to enforce them. I would like to see the whiplash in women's hands.  The suffrage in the hands of the men degenerates into a couple of petrified parties. The man votes for his party and gets the city in the condition this one is in now - a disgrace to civilization.  If I live seventy-five years more - well, I won't - fifty years, then, or twenty-five, I think I'll see women use the ballot. It's the possession of the ballot that counts.  If women had it you could tell how they would use it.

Bring before them such a state of affairs as existed in New York City today and they would rise in their strength at the next election, elect a mayor, and sweep away corruption.
True, they might sit ten years and never use it, but on such occasions they would cast it. Or in the case of an unjust war. Why, war might even pass away and arbitration take its place.  It never will so long as men have the votes.

The contention that only vicious women would vote is absurd. How many of our 600,000 women are vicious?  Not enough to amount to anything. If women could vote, each party would feel compelled to put up the best candidate it could or take the risk of being voted down by the women.  States are built on morals - not intellects And men would never get any morals at all if the women didn't put it into them when they were boys.  If women could vote the good women would all vote one ..Men won't do that. It's a choice of evils with them."

According to  President Nathaniel Myers who introduced Mr. Twain, the Hebrew Technical School for Girls (2nd Ave. and E. 15th St.) was in the midst of ongoing expansion. He explained that the unique purpose as the single society in New York City was to offer a vocational education to Jewish girls.  He declared the work of the school to  be vital in a world where girls were too often forgotten.   (Reference:  www.jfew.org/?history_mark_twain)

Dear Mark Twain, he passed away from us on April 21, 1910 just nine years short of its passage by Congress and ten years short of is ratification as the 19th Amendment.  But I feel he was smiling on high for the women finally getting their right to vote.