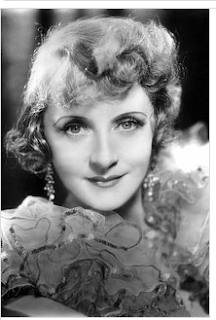 In the Introduction to her autobiography With Powder on My Nose, she wrote:
"Billie Burke is my real name, not a stage name. I was named for my father, Billie Burke, who was a singing clown with Barnum & Bailey and in Europe many years ago. I was formally baptized 'Mary William Ethelbert Appleton Burke' in Westminster Abbey, London, a name immediately ignored by everybody. Since I started on the stage in England some people believe I am English. I'm thoroughly American, born in Washington, D.C. My mother's family was from New Orleans and my father's from Ireland."

While she is primarily known today by the billions of people who have seen the 1939 film The Wizard of Oz, many don't remember that she starred in twenty-one plays on Broadway, including roles in her husband's Ziegfeld Follies, and that there were sixteen silent films between 1916 and 1921 and sixty-three talking pictures in her lengthy career.  As a TCM junkie, I can never see her enough in the Topper series, Dinner at Eight, The Man Who Came to Dinner, Father of the Bride and The Young Philadelphians (in which she "stole the show").    Her voice was unique in intonation, which she accentuated in character roles as dim-witted, spoiled, society types.  No one can imitate that sound.
Her beauty and taste made her a major trendsetter throughout the 1910s and 20s. Much of her wardrobe, on screen and off, at this time was provided by the leading European couturier Lucile (in private life Lady Duff Gordon), whose New York branch was the fashion mecca for socialites and entertainment celebrities.

Cameron Shipp co-authored Billie Burke's second autobiography entitled With Powder On My Nose, published in 1959. In the last chapter, "How To Write a Book with Billie Burke" he gives a very humorous, witty and insightful account of his subject. The following is an excerpted part of that chapter.

"On Wednesday night, January 28, 1959, after the curtain had fallen on the last act of Listen to the Mocking Bird by Edward Chodorov, the Shubert Theatre in Washington, D.C. caught fire and was destroyed.  Miss Billie Burke, Miss Eva Le Gallienne and Miss Una Merkel, stars of the play were safely in their hotel rooms when the blaze started. If they had been on stage or in their dressing room, which were two flights up and reached by narrow iron stairways, they would almost certainly have burned to death. The ladies thanked Providential timing for saving them, but the fire in the theatre was a professional disaster. Sets and scenery were a total loss and Listen to the Mocking Bird was not able to reopen.
Miss Burke was particularly distressed.  There had been good hope that the play would reach Broadway, where she had not appeared since 1944, in Mrs. January and Mr. X by her friend the late Zoe Akins. She was eager to return to the street of many triumphs after years of work in Hollywood. And in Listen to the Mocking Bird, which was a drama, she thought that she might at long last demonstrate that she could portray a character much deeper than those she once described as the "twitter-pated, bird-witted ladies" she had been compelled to play in the movies.
Her Broadway plays, although they were all comedies, were highly sophisticated plays, much superior to her Hollywood material. Her range was wide, but Hollywood stuck to a salable commodity in her nonsense parts and gave her nothing else to do.

WITH POWDER ON MY NOSE AS THE CO-AUTHOR
During her hiatus from film work, she found time to work on With Powder On My Nose. She had been preparing for ten years, writing notes in pencil on yellow scratch pads and essays in green ink on embossed letterhead.   She also had, she said, a good many thousand words about love, a subject which she approves mightily, but most of these had become scattered between her sitting room, her drawing room, and her kitchen.
Her favorite method of communication is not note-making. She prefers Western Union above all else and next to that the telephone. Any friend of hers is likely to get two or three long telegrams a day from her, not necessarily containing news. Undoubtedly she acquired the telegram habit from (her late husband) Florenz Ziegfeld, who used to send dozens a day, often to people in his own theatre, only a few feet from him.
She keeps a bulging and battered leather notebook overflowing with names and addresses of friends and calls them no matter where they are. She is at her warm and funny best by long distance.
Like many another actor or actress who has created an image on screen, and has performed the image in public for many years, Billie Burke often reverts in private to typecasting. She has played vague, fluttering ladies in movies so long that she goes in and out of character anywhere, without difficulty.  The lady knows what she is doing at all times. She knows what non sequiturs are and thoroughly enjoys dropping them for people to trip over.
One day she said, "I imagine some of this will be a funny book.  It will almost have to be because I want to say some things that are true, and to say them all of a sudden. If you do that you usually create an effect of shock, the truth being a rare thing. People are appalled by it and don't know what to do except to laugh." (Note to actors, this is a great timing tip).
Miss Burke's truths were assembled in interviews, by telephone, and by having read her notes, and expand them, into a tape recorder. She tried at first to manage a recorder herself but without success. She claimed that the machine was a monster and that the tapes got loose and swirled around the room and tripped her up.  But when someone else was on hand to start and stop the recorder she was delighted.  At her first session, she talked rapidly for two hours without stopping--clearly and emphatically, like an actress on stage who knew her lines cold.  She was disappointed when evening fell and the recorder was taken away from her.  She taped thousands of more words, most of which appear in this book.  She had only one failure. Carried away one afternoon with admiration for soap, she spoke three thousand words on how to take a bath.
Shortly after this book was completed and while Coward-McCann, Inc. was starting to put it into type, Miss Burke---now in full flight of authorship--was still searching for notes she was sure she had put somewhere. She had not, for instance, listed her favorite actresses but these were easy to remember: Katharine Cornell, whom she considers the most glamourous, the most 'theatre' of all; Helen Hayes, Ethel Barrymore, Mrs. Minnie Maddern Fiske, Ruth Gordon and Siobhan McKenna.
As for actors, she stopped firmly with the name of John Drew, her leading man in her first American play, and declined to go further. "He brushed his hair so beautifully," she said.
"And be sure," she said, "to sum it all up with this advice: "Girls, keep your shine coming from within and powder on your nose, and life will be much more fun."

Resource:   Wikipedia, Google images
With Powder On My Nose (already mentioned in the text)