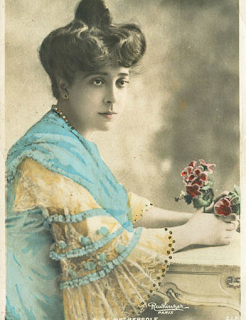 The English Bernhardt has been forgotten, rarely referenced and yet was involved in one of the  most controversial episodes in theatrical history when her starring role in Clyde Fitch's Sapho (adapted from the novel by Alphonse Daudet) was at the center of a sensational New York City indecency trial.   The incident is considered a notable step in the transformation of American society's attitudes regarding gender roles and public depictions of sex in the 20th century.

She was born in London, of Spanish descent on her mother's side.  Her father was Henry Nethersole, a solicitor. Her stage debut occurred at the Theatre Royal, Brighton in 1887.
Her powerful emotional acting made a great impact in Carmen which she performed in America in 1906.
Other roles include The Second Mrs. Tanqueray (Odeon, 1904); Magda, Adrienne Lecouvreur and Camille at the Sarah Bernhardt Theatre.

Theatrical critics at the turn of the century attributed her Spanish ancestry to the passionate intensity of her acting methods.  She was known for her 'ferocious' emotionalism in climactic scenes.
Her personal life was very ordered and most professional. She was known for her punctuality, strict health regimens concerning exercise and diet, and for her self-conscious mimetic artistry.  She advocated for the plays of Ibsen, Shaw and Gorky and was willing to appear in controversial projects.

When she began performing on the English stages at 17, her international reputation was acclaimed when she played a supporting role in
The Dean's Daughter at the St. James Theatre.  Her unbridled emotional approach to roles was noticed in Agatha (1892), prompting  conventional critics like Clement Scott to remark with surprise that 'women seldom let themselves go on the English stage.' When she alone made The Transgressor, a tedious, preachy play about marriage laws, a gripping experience in 1894, she debuted with this play in America the same year.
Acclaimed Broadway producer Augustin Daly is responsible for branding her the "English Bernhardt".  The New York audience was not overwhelmed and critical opinion was undecided until she performed Camille in which her subtlety was embraced and she continued for many years to cross the Atlantic regularly in plays featuring a female protagonist.

THE SOUL KISS
When a conference was held at the Athenee Theatre in Paris in 1908, Robert Eude said that it was Olga Nethersole who invented the soul kiss (an especially long kiss for which Maude Adams had held the record.)

OLGA, SAPHO AND THE NY SOCIETY FOR THE SUPPRESSION OF VICE 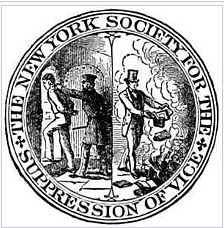 The NYSSV was an institution dedicated to supervising the morality of the public, founded in 1873 by Anthony Comstock and his supporters in the YMCA. It was chartered by the New York State legislature, which granted its agents powers of search, seizure and arrest, and awarded the society 50% of all fines levied in resulting cases.
Anthony Comstock (March 7, 1844 -September 21, 1915)
was a U.S. Postal Inspector and politician dedicated to ideas of Victorian morality. The terms 'Comstockery' and 'Comstockism' were used for his extensive campaign to censor materials he considered indecent and obscene, such as birth control information.  (Note:  How relevant to today's political climate.)

In 1873 he successfully influenced the U.S. Congress to pass the Comstock Law, which made illegal the delivery by U.S. mail, or by other modes of transportation, of "obscene, lewd, or lascivious' material as well as prohibiting any methods of production or publication of information pertaining to the procurement of abortion, the prevention of conception and the prevention of venereal disease.
George Bernard Shaw used the term comstockery in 1905 after Comstock had alerted the New York City police to the content of Mrs. Warren's Profession which caused the play to be closed after opening night.
Comstock aroused intense loathing from early civil liberties groups and intense support from church-based groups worried about public morals.  He was made a special agent of the USPS, with police powers including the right to carry a weapon.
During his career, he clashed with Emma Goldman and Margaret Sanger. In her autobiography, Goldman referred to Comstock as the leader of America's 'moral eunuchs' He had numerous enemies and in later years his health was affected by a severe blow to his head by an anonymous attacker.   He lectured to college audiences and wrote newspaper articles to sustain his causes.
Before his death, he attracted the interest of a young law student, J. Edgar Hoover, who was interested in his causes and methods. 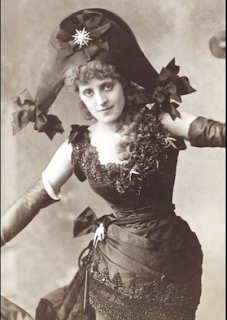 Olga Nethersole had asked Clyde Fitch to adapt Sapho, telling the story from the point of view of the lead female character rather than the male character as was done with the original novel and play.  She produced, directed, and starred.
Sapho is a 'problem play' centering on a woman who has love affairs with men to whom she is not married.  The lead character, Fanny LeGrand, seduces a naive man named Jean Gaussin. In the scene that caused the most furor, the two characters ascend a spiral staircase together, presumably toward a bedroom though that is never shown or staged. In the end LeGrand leaves Gaussin to reform and marry the father of her child.

After out-of-town tryouts in Chicago and other cities, the play opened in New York at the old (1882-1904) Wallack's Theatre on Broadway and 30th St. on February 5, 1900. Reviews were negative and the press predicted it would flop.  The show's notoriety kept it going and it ran for 83 performances.
From 1901-1913 she toured in American cities and in London and Australia.   The play remained controversial, with municipal authorities in some cities banning performances entirely or insisting on changes in dialogue or costumes.
Under pressure from the NYSSV, the Society for the Study of Life and the New York Mother's Club who protested the play's language and immoral costumes, New York D.A Asa Bird Gardiner ordered Olga Nethersole, her co-star Hamilton Revelle, and two managers to be arrested on February 21.  Police closed the theatre on March 5.    Following a two-day trial, the jury spent 15 minutes acquitting her and the others.  The play reopened on April 7.

The Sapho indecency trial is a well-known step in the transition from the era of Victorian morality as it existed in America, particularly regarding attitudes toward onstage depictions of gender, intimacy and sex.  According to Olga Nethersole's 1951 obituary (NY Times), "During the Comstock era...when a public kiss on the mouth was considered an indecency...Nethersole typified the growing revolt against prudery and was a staunch advocate of women's rights and intellectual indepencence."

Some historians theorize that the authorities treated her more harshly than women appearing in other "courtesan" plays (Camille, The Second Mrs. Tanqueray) because she was a manager in addition to an actress, which upset other contemporary social norms regarding the roles of men and women.

LATER YEARS AFTER RETIREMENT FROM THE STAGE IN 1913
She served as a nurse in London throughout World War 1 and later established the
People's League of Health, for which she received the Royal Red Cross (RRC) in 1920. She combined her theatre work with health work for the rest of her life.  She was created a Commander of the Order of the British Empire (CBD) in 1936. 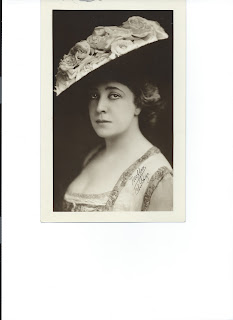 She never married but dedicated her life to the pursuit of human rights, advocating for women and their independence and giving her all to every role she chose to play.