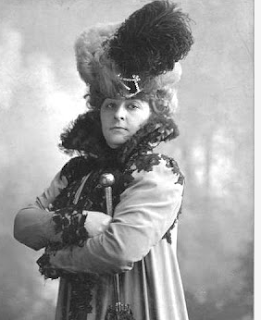 "I was convinced that 'the play's the thing'. Authors could not comprehend that I wanted a play, not a part. I wished people to leave the theatre talking about the Amelia Bingham company rather than about Amelia alone."
Lewis Strang, Famous Actresses, Amelia Bingham

Amelia Swilley Bingham's stage career began in Hicksville, Ohio where her father was not only the Methodist minister but a hotel manager.  While waiting on tables in the hotel dining room, it is reported that the handsome leading actor from a touring company was attracted to her. After a short courtship she became Mrs. Lloyd Bingham in 1890.

For the next three years he guided her through apprenticeships around the country.  She made her New York debut at the People's Theatre, 199 Bowery in the melodrama, The Struggle For Life.
Her popularity peaked in 1897 when she tallied 9,000 of the 30,000 votes cast in a newspaper competition for the title of American Stage Queen. Earlier stars like Lillian Russell,
Ada Rehan and Fanny Davenport only received one hundred votes each.
Under Charles Frohman's management, she appeared in several plays on Broadway (most of them forgotten today).  A visit to London in 1901 changed her destiny.  She met actresses who were their own producers.  As a result she launched the Amelia Bingham Company.  She cast
Bijou Fernandez in Clyde Fitch's play, The Climbers, a play Frohman and other producers rejected. As Lewis Strang reported: "Miss Bingham's enterprise has been conducted with business acumen, good sense and considerable artistic enthusiasm."  The play was a resounding success and also toured throughout the country.
According to Ms. Bingham:  "When I announced my intention to establish my present enterprise, my friends attempted to dissuade me, telling me that I could never act a part, manage a theatre, and supervise my household. They declared my health would not stand the strain. Not only have I found time to take care of myself physically, but I have performed all my duties, and entertained my friends, read many plays and kept abreast with the larger interests of the day. I am much interested in politics and finance, have continued my acquaintance with the best literature, and devoted considerable time to painting and music.
What are my ambitions?  It is my hope that some day the Amelia Bingham company will take the place of that organization directed for so many years by (the late) Augustin Daly who has always been to me the most admirable figure in the theatrical world."

"My father was a strict Methodist and I was brought up to believe, that outside of the Methodist church and Sunday school, salvation was not thought of.  I don't believe a member of my immediate family had ever been to a theatre, much less known an actor, before I startled and almost broke the collective heart of the town by marrying my husband.
Those first visits home were painful. People turned their heads as I walked down the street. My old Sunday school teacher had the courage to come to see me and when he went away, he took my hand in his and said: "Amelia, I hear there are some good men and women on the stage. I hope so for your sake."    Eventually her family and the townspeople warmed up to them.


In 1904 she toured with Gilbert Miller in Olympe and starred with
William H. Crane and Douglas Fairbanks Sr. in The New Henrietta, prior to World War 1.

She also achieved success both on Broadway and in vaudeville in her adaptation of Big Moments from Great Plays (1909 on).

"I love work, hard work. No conscientious actress with the interest of her manager at heart can get on without work. People who imagine that an actress can maintain a prominent place in the front rank of the vast theatrical army without ceaseless industry are misinformed. She must read, hear good music, become acquainted with the works of fine artists, do everything to stimulate that necessary quality--IMAGINATION!"

On April 23, 1902, famed actor Joseph Jefferson purchased the mansion for $40,000 in foreclosure actions. He sold the house in 1905 to a financier and his wife.  After a period of intense renovation, the title was transferred to Amelia Bingham. She set about sprucing up the outside.  On two small balconies above the first floor (now gone) she perched three heroic-sized statues and two large busts-the one directly over the entrance being of Shakespeare.  The redecoration prompted the New York Times to call it "one of the really unique residences in the city."

It became a sightseeing attraction called "The house with the statues".   In 1916 the New York Central Railway proposed laying tracks below Riverside Drive along the Hudson.  Amelia was enraged.  She hosted a meeting of the Woman's League specifically to protect Riverside Park.    "We must turn to these splendid men (oh, let's say they're splendid) and tell them to have mercy on our happiness. But if they persist I shall sell my home for what I can get and move where I won't have to listen to steam shovels for ten years.  I tell you there are lots of us who can't wait the generation it will take the trees to grow again in our beautiful front yard."

A year later she was in danger of losing her view not because of the New York Central Railway but because her home was in foreclosure. She had failed to pay a second mortgage of $25,000 and when she was ordered to vacate the property or pay rent of $250 a month, she refused to do either.

The crisis passed but in 1925 two young robbers gained entrance and forced the maid at gunpoint to lead them upstairs. There Amelia, her seamstress and her maid were bound with silk stockings while the robbers ransacked her bedroom, making off with $1,500 of jewelry and valuables.         In the meantime, the quick-witted Amelia sat on a bag containing $20,000 in cash and valuables and chatted casually with the thieves to distract them. When questioned about her calm in the face of danger, she said, "It was just like the stage."

She died in the house after a long illness on September 1, 1927. Her sisters sold the house the next year.   While earlier in her life she had wished to be buried in the family plot in Hicksville, she was buried at the Woodlawn Cemetery in the Bronx after a funeral which took place at the Little Church Around the Corner.