Scene:  The Shubert Theatre in New York City,  before a full house of celebrated theatre folks
and members of the adoring public.   Julie Harris talks about Helen Hayes at her memorial tribute.
"She was the light of my life. She was an inspiration to me, now and always.
I first remember seeing her on stage as Viola with Maurice Evans in Twelfth Night.
I took a picture of her---she was so charming, so beautiful, so glamorous, absolutely adorable, every bone in her body.
Fast forward many years later.   I was in  I Am A Camera, a play by John Van Druten. The producers were giving me a beautiful party at the Empire theatre to celebrate my stardom because my name was over the title of the play on the theatre.
Helen came with our press man, Barry Hyams, and she came to the stage door and my dressing room and gave me a white envelope with a letter inside.    In the letter she wrote that she was giving me as a talisman, a little handkerchief, in the corner of which were the embroidered initials SB. 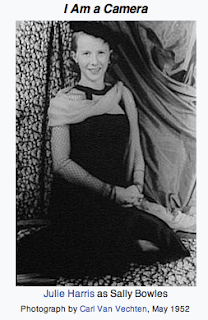 And I remember thinking, what if I lose this handkerchief? I better find someone to give it to right away.    So later on that season I saw Susan Strasberg in The Diary of Anne Frank and I passed the handkerchief to Susie.

Now many years later, Helen and I were sitting back stage at the Wilbur Theatre in Boston. It was the occasion of the Elliot Norton Awards and we were sitting right in the wings on a little bench and Helen turned to me. She was going to be specially honored that night and Mr. Norton was making a speech about her. She was sitting quietly next to me. She had just come from a grand tour on a ship and she looked sparkling, charming, beautiful, electrifying, dazzling (I couldn't take my eyes off her) and she turned to me and in a very quiet voice said, "You know I don't miss the stage at all!" And I said, "No, I suppose not. You have had this wonderful career in the legit. You must have done all the things you wanted to do.' And she looked at me quizzically and said, "Yes, I suppose that's it."  And then we heard Elliot Norton say, "And now Miss Helen Hayes".  And Helen, like a ten year old child, strode across the stage and she didn't need any lights at all.  She was luminous. She just lit up the whole world with this radiance.  And she made the most wonderful speech to the audience. At the end she said, "You
know I miss the stage!" And then she said, "Let me do something for you."  She recited the whole last scene from Victoria Regina!
I said to her after, "You don't miss the stage at all, do you?"

I miss her. I will always miss her. But I will always have that radiance inside my heart forever and ever. I am going to say a prayer of  St. Teresa of Avila for all of us actors and for Helen.

"Let nothing disturb you, nothing frighten you. All things pass but God never changes. Patient endurance attains all things. He who possesses God is wanting in nothing. God alone is enough."
You are enough for us Helen, always forever and ever.
We love you!