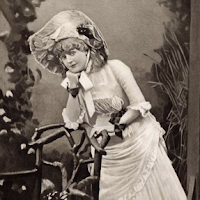 Born in Philadelphia, the daughter of Captain Palmer, a gentleman of English birth and an American mother who was the daughter of a Supreme Court judge.  The family moved to Vienna when she was 8 and she was taught music and to speak German. In Paris she learned dancing and French.  When the family moved to New York she was sent at an early age to the Convent School of the Sacred Heart at Manhattanville.   After her continental and educational experiences she made her first stage appearance in 1876 at the tender age of 11. Followed by her first New York appearance at the Park Theatre, Brooklyn in Kisses by A. R. Cauzarn.  But the first real break occurred in the Booth Theatre's production of Dan'l Druce under the management of Henry Palmer, a relative.  From then on becoming a serious actress was her life's goal.  Other roles: Dot in The Cricket and the Hearth; Minnie in Engaged and Louise in The Two Orphans (a huge success) and in the 1879-1880 theatre season she attained real stardom in Minnie Palmer's Boarding School, a two act comedy written for her. After touring the United States for two years, writer William Gill wrote My Sweetheart which gave fuller scope to her talents.
From a chat with Minnie Palmer, she was quoted: "I was born in Philadelphia, made my debut when quite a little girl at Ford's Opera House, Baltimore as Titania in Midsummer Night's Dream, then played ingenue parts at Abbey's Theatre in this city for a year. I became a star and toured all over the country in Minnie Palmer's Boarding School, then came My Sweetheart in which I appeared for nine years. During that time I played in the United States for several seasons and then Australia and England.

MARRIAGE TO A BRUTE
John R. Rogers, a theatrical manager, married Minnie and brought her to more audiences in America and abroad.  "No actress as reported in Stars of the Stage photogravure series, has been more consistently 'boomed' and her manager is regarded as a good and past master of keeping his star's name before the public. She is deservedly a public favorite."  (1887)
In 1884 Mr. Rogers purchased a South African diamond weighing just under 50 carats. He was the co-owner. They needed another investor.  Enter Minnie Palmer described as a pretty, pert, petulant, pouting bit of humanity with the step of a fairy, the carol of a bird and the exuberance of a schoolgirl."  There are various accounts how she came to acquire the Cleveland Diamond, named after President Grover Cleveland. One of them states that she purchased it from a London dealer for 8,500 pounds after having it cut to a weight of 42.5 carats and had it mounted in claws of gold with a reversible frame on a moveable brooch with a center fitted with a mechanism like that of a watch, worn at the right side of the waist in front.  Another account claimed she received it as a gift from one of her many admirers. However, verified documentation asserts her path to ownership began with John Rogers who was already known for dabbling in the diamond business as a sideline.
Infatuated with Minnie who shared a common bond with him about fine jewels they were married.   He had the diamond fitted into a brooch and gave it to her to add to her collection. She flaunted it on stage. Was the gesture done out of love or as a publicity stunt to further her career?

According to the New York Times (1890) she narrowly escaped death when she was assaulted by her husband who brandished a large carving knife. She received minor injuries to her face and her hand. He was angry because she had ignored his edict that she stay away from her  mother (who had objected to her marrying a man 20 years her senior). Upon her return from a horse show with her parents, he attacked her. A possessive man, he had already written many insulting and abusive letters to Palmer's friends in an effort to keep them away from her. However Minnie was not media shy. She gave the Times reporter a very detailed story about the violent incident and problems in her marriage which they were happy to print. She sought a divorce. Desperate to rid herself of the explosive Rogers she agreed to, among other things, divide their jewelry collection in halves. She then sailed to England leaving lawyers working out the details. There were attempts at reconciliation but he lived to the age of 92 without it. Minnie died at the age of 76.

A STAR in VAUDEVILLE
When she was asked in an interview what she would do in the future, she replied: "Nothing one has done is ever quite so interesting as what one is about to do. I am going into vaudeville. If vaudeville likes me, I shall like vaudeville indeed. I have brought over two little one act plays with a full equipment of scenery, for my engagement here and I have great faith in both of them.
One of them was Rose Pompon with Frank Conway. According to the NY Dramatic Mirror's review in 1899, "Minnie Palmer's debut at the Palace takes place in a French Marshal's quarters. A Red Cross sister asks for an audience as he is reviewing death warrants. She wants a reprieve for a man who has killed a man in a duel for a 'worthless woman' named Rose Pompon.  When he leaves the room, it is discovered that the Red Cross sister is Rose, who has repented her ways. Under her cloak is an old stage costume and on the marshal's return she purrs and pouts and sings and dances and uses 'tricks' to obtain the pardon.  Ultimately he grants it. The play is pleasing. Frank Conway is excellent as the Marshal.
#MinniePalmer #RosePomponinvaudeville #ClevelandDiamond #vaudeville #NYDramaticMirror

Posted by Mari Lyn Henry at 1:14 PM No comments: