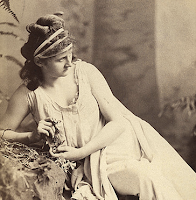 In the early 1860s  her family moved to Louisville, Kentucky, where her father enlisted in the Confederate States Army in the Civil War. He was killed in action at Mobile when she was three. She was educated by the nuns at the Ursuline convent and the all-girl Presentation Academy.

When she was twelve, her stepfather introduced her to the works of Shakespeare, an event which helped to shape her later career. Lessons in English literature and elocution were begun with Professor Noble Butler of Louisville, and progress was rewarded with tickets to the Saturday matinees at the Louisville Theatre.  Her early theatre-going adventures are chronicled in her autobiography A Few Memories published in 1896.  In her own words she discusses her love affair with the theatre and when she decided to pursue a stage career.

THE FIRST PLAY I ever saw was Richard the Third with Edwin Adams as the crook-backed tyrant.
Young, graceful, handsome, an ideal actor in romantic characters, he was hardly fitted for so sombre and tragic a part. Yet the force of his personal magnetism stamped his every word, look, and gesture indelibly upon my memory.  The music and lights; the actors and actresses, whose painted faces seemed far more perfect to me then (I was 12 years old) than anything in nature; luckless Anne; Henry the Sixth, who, though he is an interloper in the play, makes, through Cibber's daring, a splendidly effective acting scene; the royal army, consisting of six "scrawny" knock-kneed supers, with a very unmilitary look about them----all are as clear before me now as though I had seen them yesterday.

HOW WE ALWAYS REMEMBER the first dip into a new sensation after impressions of things a hundredfold greater are blotted from our minds!  My mother, seeing my delight in the play, promised that, if we deserved it, my brother and I should occasionally attend the weekly matinees. With such a reward as two theatre tickets in view, my amount of good conduct was cheap in payment.  I became less mischievous and forgetful.

WHEN THE LONGED-FOR SATURDAY CAME, little Joe and I would start for the old
Louisville Theatre, then on the corner of Fourth and Green Streets, quite two hours before the doors were opened.  The man in the lobby, observing my singular keenness, soon allowed us, early as it was, to enter; though he was compelled to lock the door after us.
We would then sit alone in the large, dimly lighted theatre, feeling the most privileged of mortals, silently watching the great green curtain, and imagining all the enchantments it concealed.  After an hour of such amusement, mysterious feet, generally in shabby boots and shoes, were seen under the curtain.  Then the doors opened, people began to drop in. There was a rustle of programmes and banging of seats.  Suddenly the footlights flared against the green curtain, under which mysterious feet were seen again, this time in dainty satin slippers or shoes--so many feet, so differently shod, yet all meeting on one common ground before the peep-hole in the curtain.
Then the orchestra, full of noise, especially at the furioso finale, after which the tinkling bell, and, to the traditional pizzicato (if the villain commenced the play) or the sweet tremolo of violins (if the angelic maiden began), the curtain slowly rose.
From that moment we became oblivious of everything but the scene before us, and only after the curtain fell upon the last act was our dream broken, when, with a shock, we found ourselves once more in the cold and dusky streets.  To leave the Temple of Enchantment and come back to commonplace realities was our daily sadness.  Fairy plays, melodramas and minstrel shows formed our regular menu. 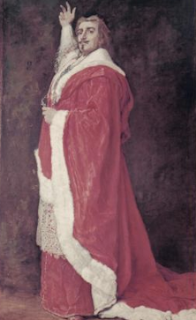 AN ANNOUNCEMENT that Edwin Booth was to visit Louisville filled its playgoers with delightful anticipations. Times were hard, we were poor, and many sacrifices had to be made to enable us to witness a few of his performances.
RICHLIEU was the first of the series. What a revelation it was! I had never seen any great acting before, and it proved a turning point in my life.  The subtle cunning with which the artist invested the earlier parts of the play was as irresistible as the power, fire and pathos of the later scenes were terrible and electrifying. It was impossible to think of him as an actor.  He was Richlieu. I felt for the first time that acting was not merely a delightful amusement, but a serious art that might be used for high ends.
AFTER that brilliant performance sleep was impossible. On returning home I sat at the window of my little room until morning. The night passed like an hour. Before the dawn I had mapped out a stage career for myself.

I was fourteen years of age, inexperienced and uneducated, but I had not a moment of doubt or fear.

Posted by Mari Lyn Henry at 5:40 AM No comments: